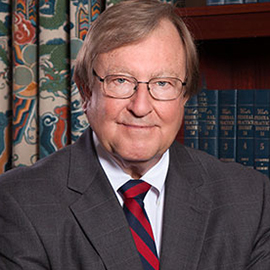 Hon. David W. Houston, III joined Mitchell, McNutt & Sams in Aberdeen, Miss., in 2013, and his practice is focused on commercial transactions, commercial litigation, bankruptcy and creditors’ rights. For the previous 30 years, he had served as the U.S. Bankruptcy Judge for the Northern District of Mississippi, presiding over cases in the Southern District of Mississippi, the Middle District of Louisiana, and the Northern, Southern and Western Districts of Texas. He conducted trials in numerous consumer and complex business cases, authoring hundreds of published opinions. Prior to assuming the bench, Judge Houston was a partner for 11 years in the Aberdeen law firm of Houston, Chamberlain and Houston. In addition, he served as a special agent with the Federal Bureau of Investigation in Washington, D.C., Tampa, Fla., and New York City. Due to his experience in the area of alternative dispute resolution, Judge Houston is available to conduct mediation and arbitration proceedings.