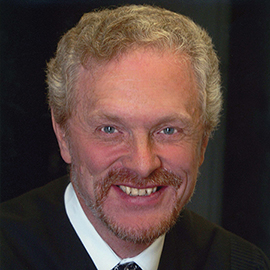 Hon. Eugene R. Wedoff is the immediate past president of the American Bankruptcy Institute. He served as a bankruptcy judge in the Northern District of Illinois (in Chicago) from 1987 to 2015, was chief judge from 2002 to 2007, and presided over the chapter 11 reorganization of United Air Lines. In addition, he was a member of the Advisory Committee on Bankruptcy Rules from 2004-2014 and served as its chair after 2010. Judge Wedoff was the president of the National Conference of Bankruptcy Judges in 2013 and 2014. He also served as a member of the NCBJ’s Board of Governors, as its secretary, and as chair of its education committee. In addition, he was an associate editor of the American Bankruptcy Law Journal. Judge Wedoff is a Fellow of the American College of Bankruptcy and a member of the National Bankruptcy Conference. He is a frequent lecturer and served as a member of the Federal Judicial Center’s Committee on Bankruptcy Judge Education. In 2016, he received the Judge William Norton, Jr. Judicial Excellence Award from the American Bankruptcy Institute; in 2009, he received the Lawrence P. King Award from the Commercial Law League; and in 1995, he received the Excellence in Education Award from the NCBJ. His current legal practice is exclusively pro bono representation in bankruptcy appeals.